Where are we now?

Life went on.  The weather got warmer and the rats moved out.  We heard of no others pets in the village being affected by rat poison and a breeder I contacted – a lady who I consider to be the font of all deerhound knowledge told me she uses it at their place all the time and has never had a problem, and that sadly eight seems to be a use by date these days for large male hounds.

We went without him to the dog friendly cottage that had been booked earlier in the year and found it wasn’t especially dog friendly after all, with an open staircase despite dogs not being allowed upstairs and too many ornaments at tail wagging height.

I bought my first ever carpet this year, having always been satisfied with whatever was already on the floor wherever I lived.  Gandalf was a pup in 2007 – that was the summer of the floods – when it never stopped raining and the garden became a quagmire.  I recall coming home from work one day and noticing the living room smelt of wet soil infused with dog muck.  Even though the garden was diligently cleared I guess with all that rain some of it must have got washed into the earth.  When everything finally dried out and he stopped going in and out so much I had a go at cleaning it.  I thought a drop of sterilising fluid in the water was a good idea, but it wasn’t!  The result was a blotchy carpet, dark in some areas and bleached almost white in others – so I did the obvious thing and bought a rug to go over the top of it.

It seemed acceptable to have a scruffy house when there was a big dog living in it.  We referred to the downstairs as ‘Gandalf’s flat’ and his beautiful presence was a distraction from the scruffiness – but without him the living room was minging, even by my standards.  I bought new curtains to go with the carpet and was slightly worried I’d become a ‘curtains and carpets’ type … but it was just a passing phase.

People keep asking if we’ll get another dog but no, not yet anyway.  Meanwhile the new carpet has been christened. My son has a puppy who comes to visit, so I now have the pleasure of being a grandma to the gorgeous little fellow pictured below.  Not brilliant photos but he rarely keeps still.

These two were the best of many blurred grey smudges: 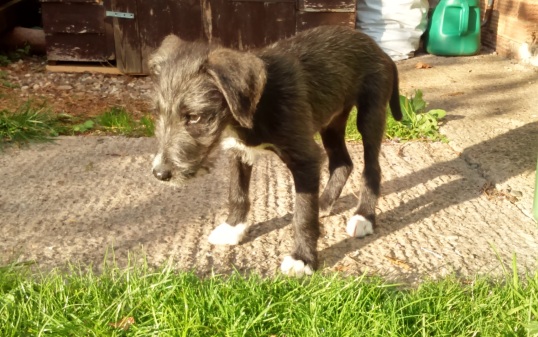