“Perhaps it’s because he is on the lead”

Alfie has come to stay for a few days and I’ve been looking forward to going for some good runs with him.

Here he is, enjoying the view from the top of my favourite hill: 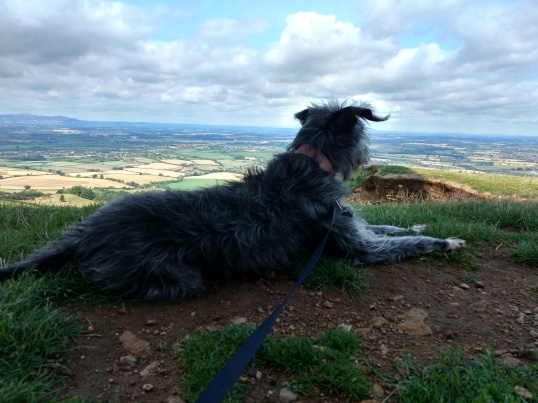 The photo would look better without the lead but there was a family with young children playing nearby and I didn’t think they would welcome him joining their game.

As soon as there was no-one in sight, I let him off the lead and he had a good run and a sniff around.  He’s the black dot in the distance: 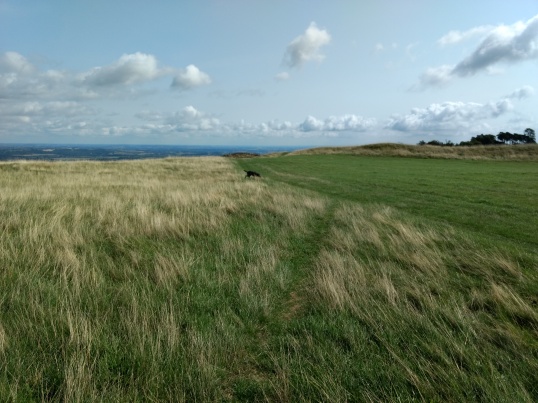 Although I hadn’t seen any sheep on the way up, we went back down the hill with the lead on and I was glad I had taken the precaution when a single sheep was suddenly in view just over a blind summit.  Alf pranced around a bit and it strutted away.  I am always aware that even if the field appears empty of sheep and there is no fresh muck around, there is often one individualist sheep that did not follow the flock when it was moved.

At the foot of the hill, Alfie was mugged by a farm dog that had come pelting along behind one of the quad bikes they use around the land.  The dog didn’t bite him but charged aggressively a few times doing that bared teeth head butting action to let us know the damage he could do if he really meant it! I guess he thought he was protecting his territory and didn’t have a proper understanding of public rights of way.  Meanwhile the lad on the quad bike was bellowing his name, but he took no notice.  No physical harm done, but me and Alf were both upset by the incident and I hope he will forget about it and not be nervous of other dogs.  I won’t be taking him up there again.  Maybe that’s the result the landowners are aiming for?

This morning we did the River Walk, knowing it would be relatively quiet today compared with the next three days.

I saw someone coming through a gateway and stepped off the path and towards the riverbank to let them pass, and a big dog came running at us, looking at Alfie in a nasty way with his hackles up.  The dog was with a couple of women.  One kept out of the way whilst the other started to call his name, but in an airy-fairy way – not prepared to sound like a fish-wife, so it was never going to work!  I managed to grab his collar and held him at arm’s length whilst Alfie did pirouettes on the end of his lead, keeping as much distance as possible.  Alfie has never shown aggression towards other dogs, he is of the slightly anxious tail wagging between the legs sort of temperament.

When this dog’s mistress finally caught up, which was probably less than a minute but seems longer when you are hanging on to the collar of a dog you have only just met, I didn’t want to make her feel awful about this incident, so I said, “He does seem to get picked on for some reason.”  (I do wonder if the ‘reason’ could be that Alfie has balls whereas so many dogs seem to be routinely castrated these days?)

There was no apology.  She said, in a loud, posh, self-righteous and judgemental tone;

“Perhaps it’s because he is on the lead!”

Oh, so it’s because Alfie is on the lead that we’ve just been scared shitless again, and it’s therefore my fault that we just experienced this kerfuffle?!

I could have given the lady a list of reasons why he was on the lead …  no, I couldn’t actually, because I never think of the right thing to say at the time – and I wanted to put distance between us.

So, I will bore you with the reasons now, sorry.  I do realise that anyone reading this probably doesn’t give a monkey’s about why Alfie was on the lead, but this is what I would like to have told her, and I’d like to get it off my chest, so thanks for listening 😉

Alfie was on the lead because:

No physical harm done these two days, but it worries me that experiences like these might make him nervous of other dogs.  He is still a young boy so I hope he will forget.