The weekend saw the arrival of my first ever, and possibly last, Ikea purchase. I have never visited the store having only ever heard colleagues complaining about ‘having to go’ there, presumably to please their partners, so I thought the £35 delivery charge might just be fair exchange for not having to go anywhere near the place, even though the sofa I bought was only £95.  At that price, I wasn’t expecting much but was still disappointed when it tuned up damaged.  I guess some people would have sent it back, but the damage was only evident once it was unpacked from the rather large box that we had nowhere to store other than the middle of the living room floor.  I justified not sending it back because it was a replacement for Gandalf’s day bed, which had reached the point of being utterly minging.  At least this smells clean and fresh, and I won’t be too bothered if he damages it since it’s already been thrown around a warehouse.  I’d have preferred something better quality but second hand but anything bigger than this would have blocked the doorway – and there’s an awkwardness with second hand seats that I want to sniff before I buy but can’t politely do that in a charity shop!  Anyway, Gandalf is pleased with it:

Oh, and here’s the old sofa: 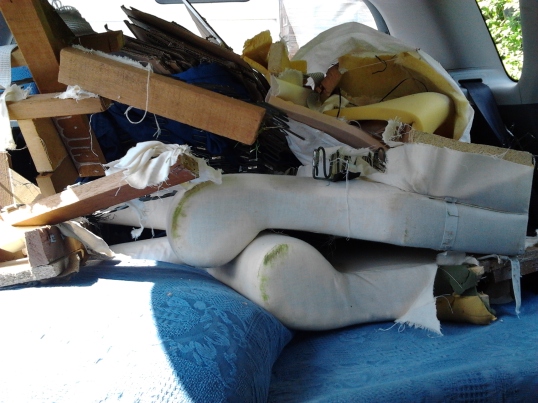 Not wishing to exaggerate Gandalf’s powers of destruction, I should add that it’s all in bits because Julz sawed it up into manageable chunks because I fancied a trip to the tip on Sunday to get rid of it. The car park and surrounding areas were heaving with with people who had gathered to watch Morris Dancers. I suppose some of those people packed into that small space must have been enjoying themselves, whilst many others might rather have been chucking their old junk into a skip.

I also did my usual weekend run, which is gradually becoming more of a ‘jog’. I’ve been running for thirty-plus years but lately it has become more like hard work than pleasure and I’ve slowed down considerably.  I keep thinking back to when running was effortless, with occasional but memorable highs, such as one evening running the last few miles along a deserted beach when I became a galloping horse and pounded faster and faster with abnormal energy and a feeling that I could run forever …

I guess the decline is just down to ageing, as I’m not doing anything different, but just feel tired and heavy. Never really been into exercise and fitness but I’m aware that if I were to give up running I would do nothing other than sit all day at a desk or in a car.  Dog walking doesn’t count – there’s too much standing around waiting whilst he sniffs and marks everything, and watching out for little dogs that are going to snap at him owing to his height.  Running has always suited me because of the solitude it offers and the escape from conversation other than the persistent rubbish that goes on inside my own head. I feel awkward though, running, and have probably mentioned it before – that straight mile stretch when I recognise a neighbour approaching and find it difficult to decide the correct distance to start smiling at them!

I thought about getting a bike, but would be nervous of the traffic bombing around these narrow lanes, and, as a careful driver, I find bikes a nuisance and frequently drive a few miles behind bikers going at twenty to twenty-five mph before I can safely overtake.  Yet as a runner, (or jogger), I feel like an obstacle when a swarm of bikes from a club rides past bellowing “ON THE LEFT!” straight into my right ear, as they pass me.  Apparently this is standard practice and they are warning the bikers behind that there is some idiot obstructing the road; on the left.

Other than that, I spent some time with my lovely ninety-one year old friend who is as independent as possible and with a very calm, reassuring manner that I love. I met him through doing care work and still visit regularly.  He was an accomplished athlete in his youth – I saw some sepia photos of a young man receiving trophies and got him to talk me through them.  But hasn’t been well just lately. He attempts to laugh things off when it’s clear that he’s struggling – so it was really good to find him so much brighter at the weekend 🙂